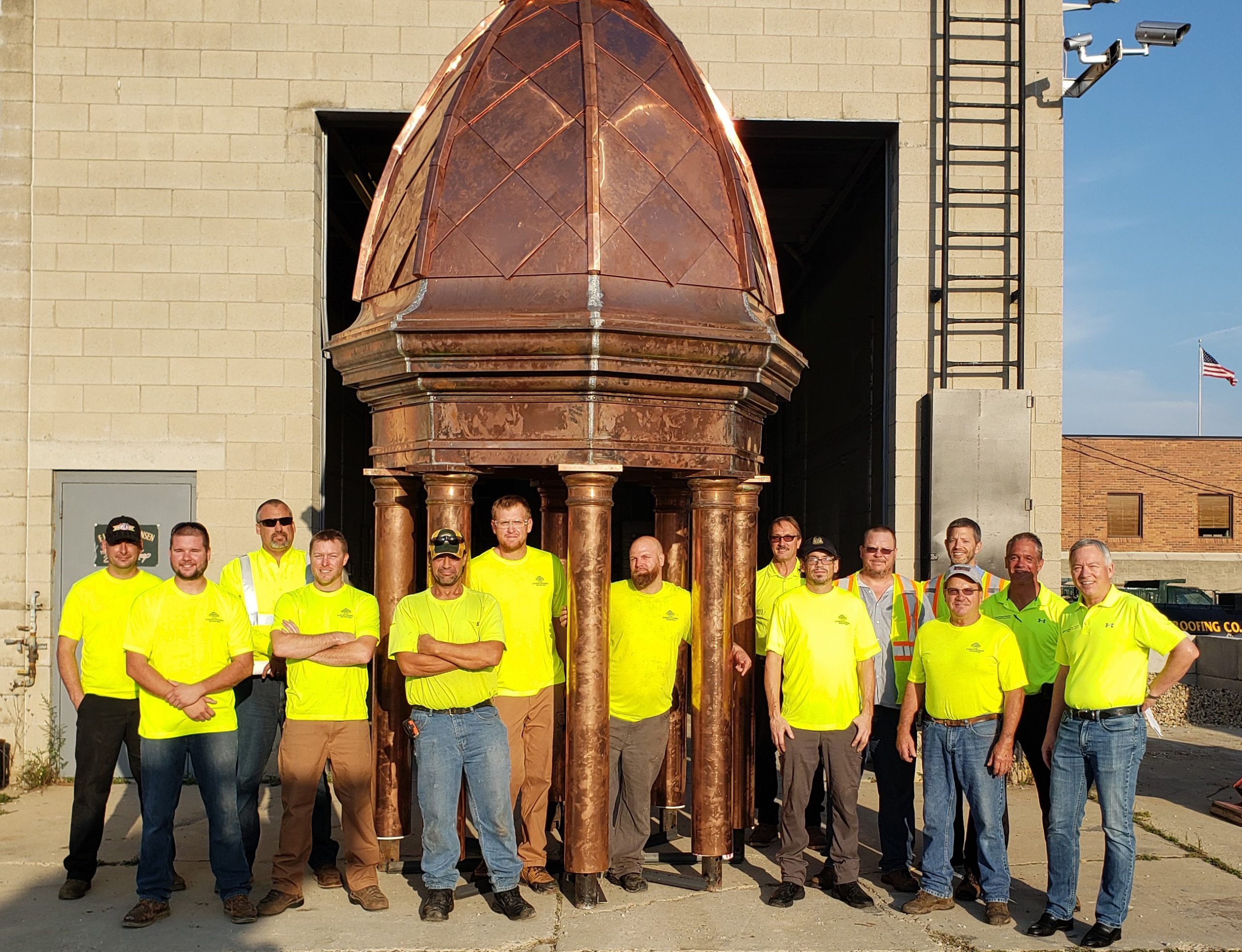 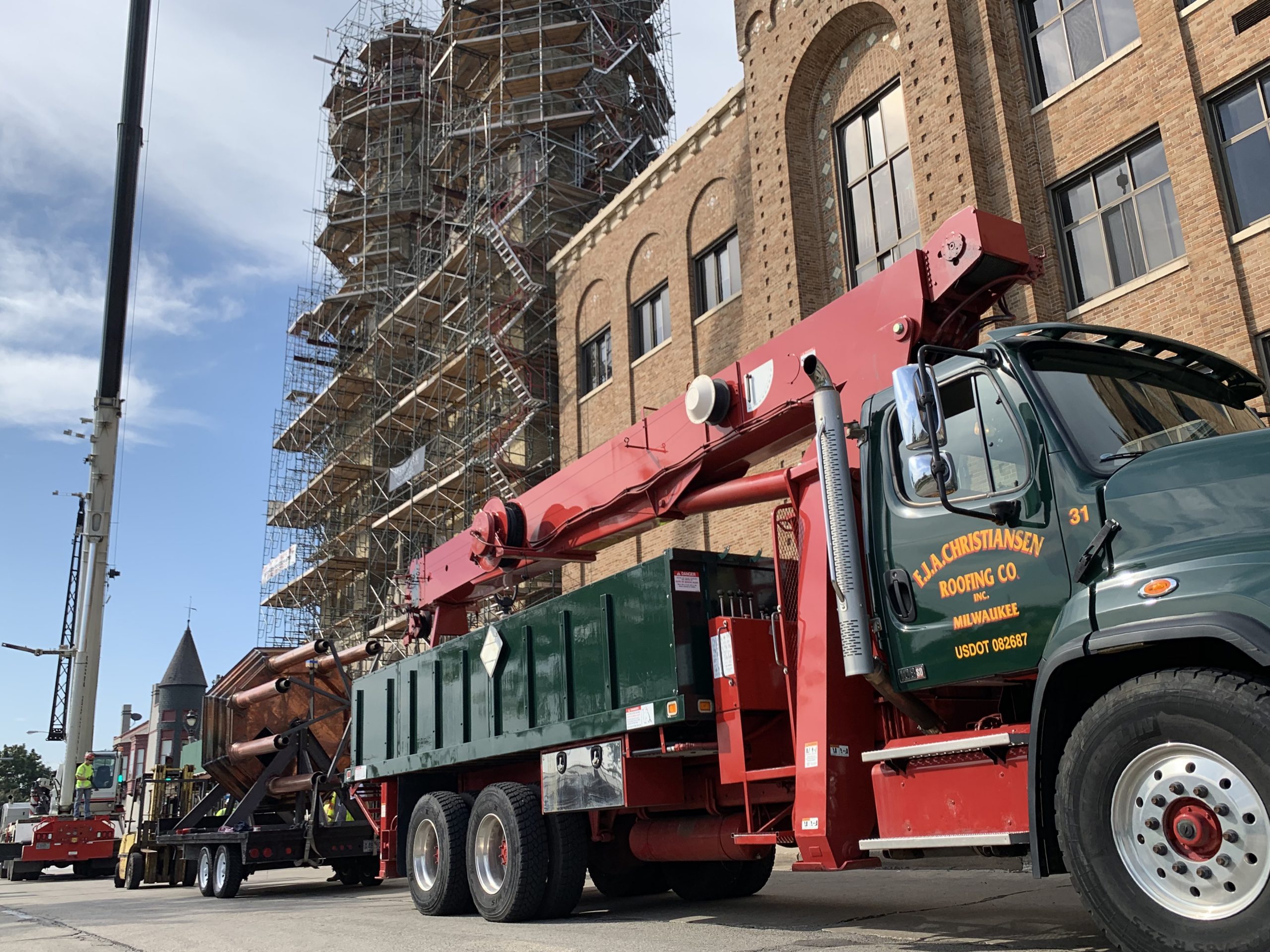 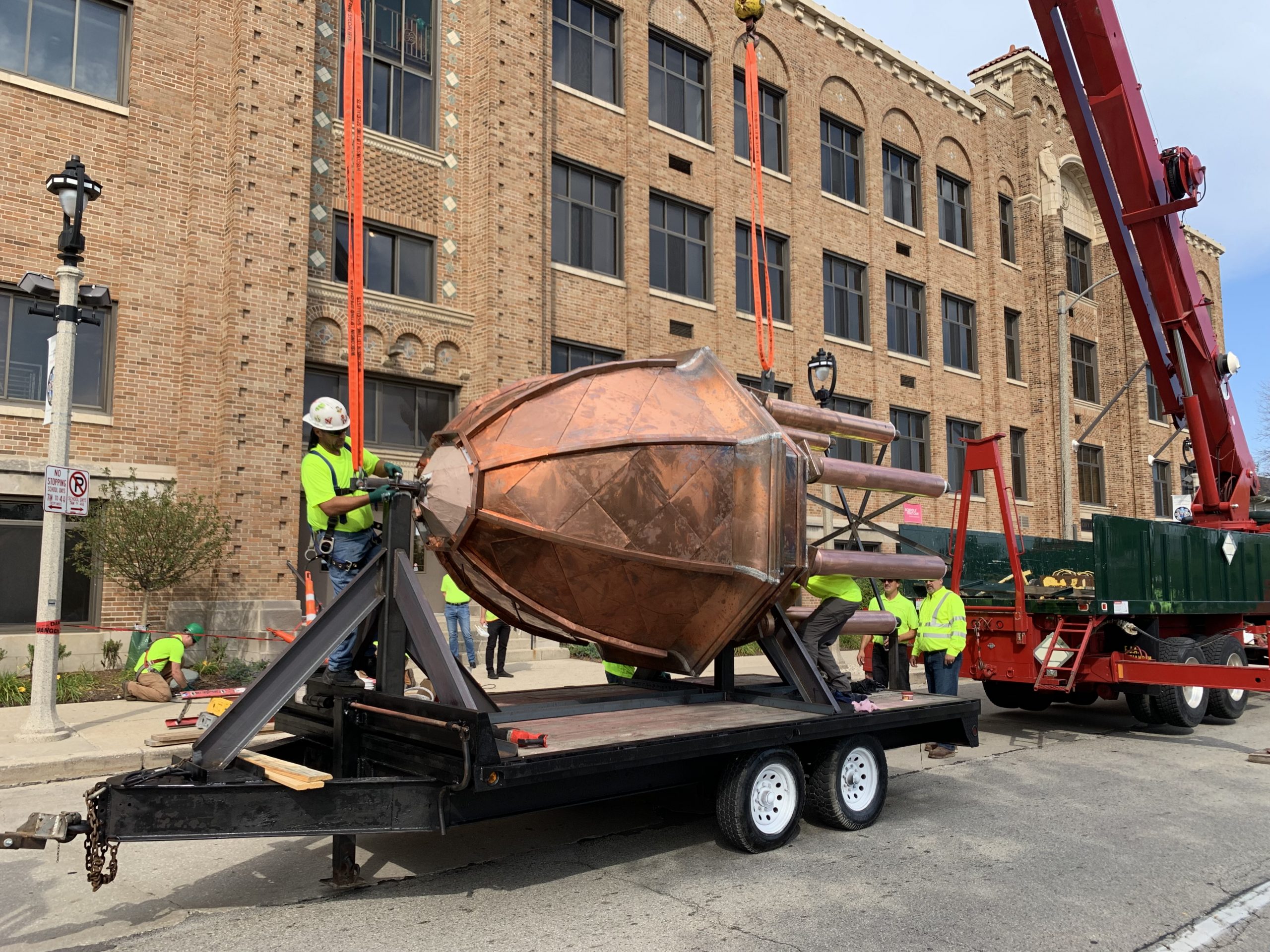 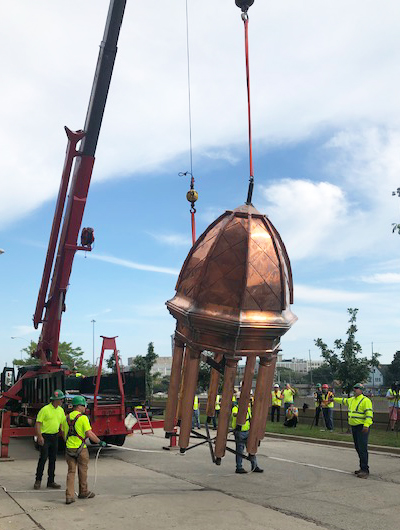 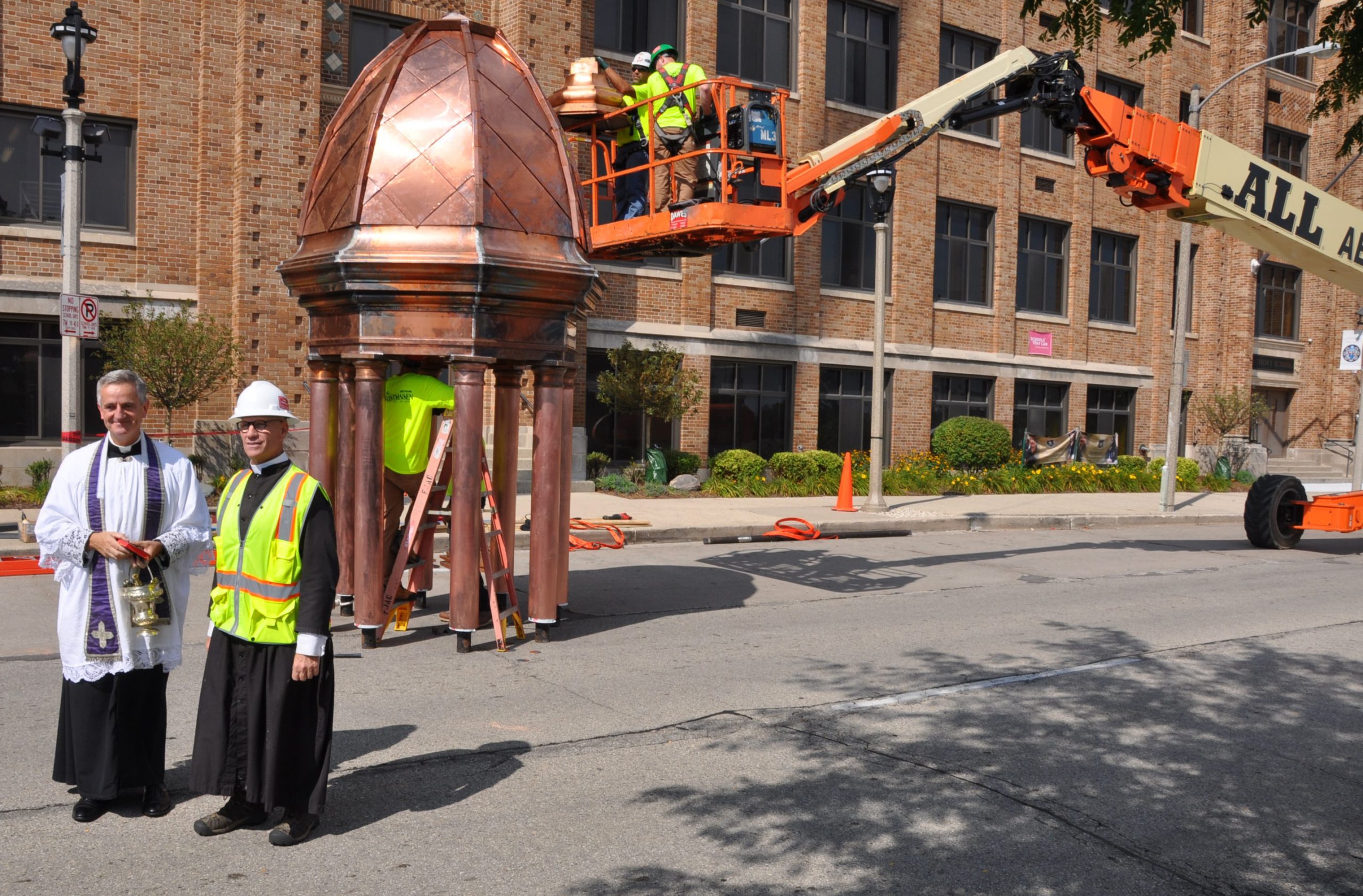 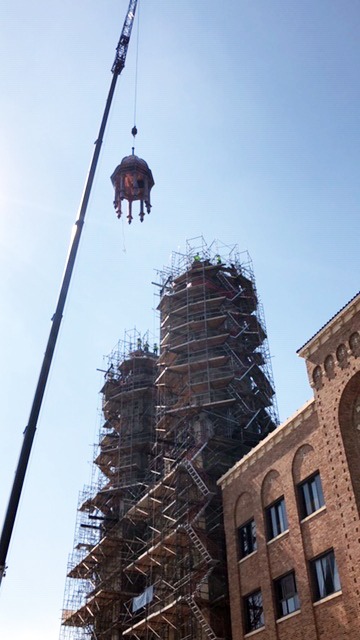 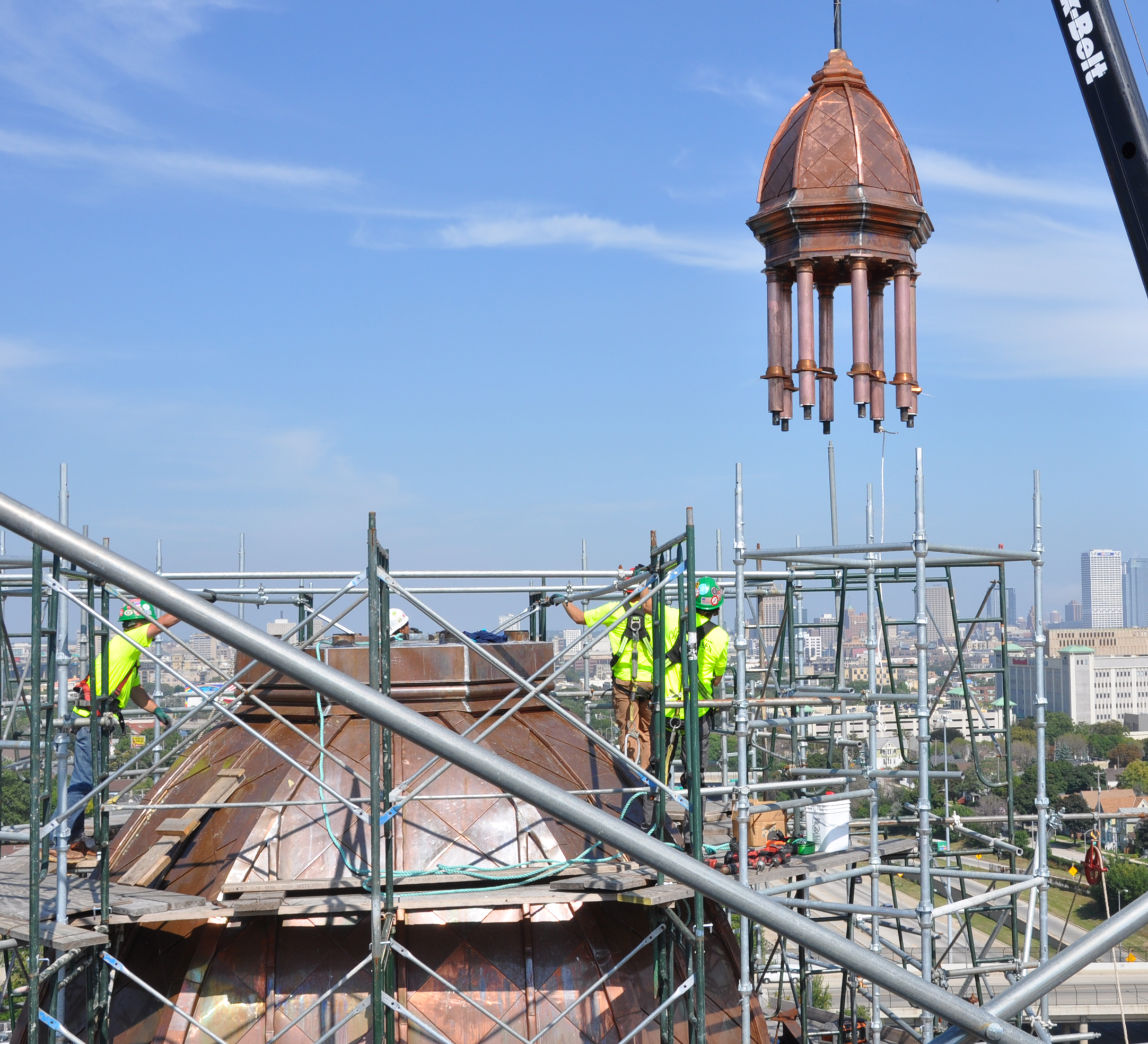 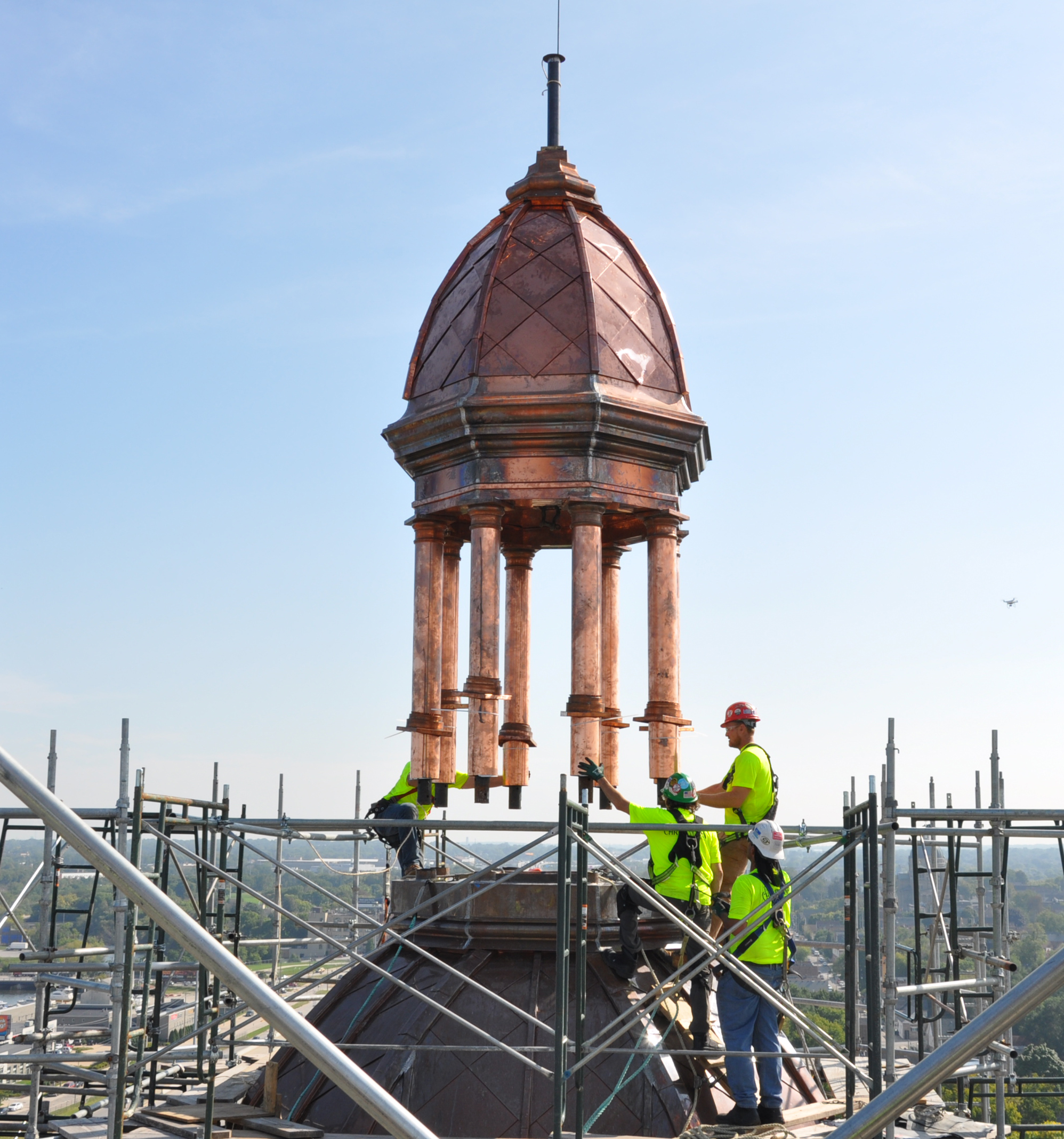 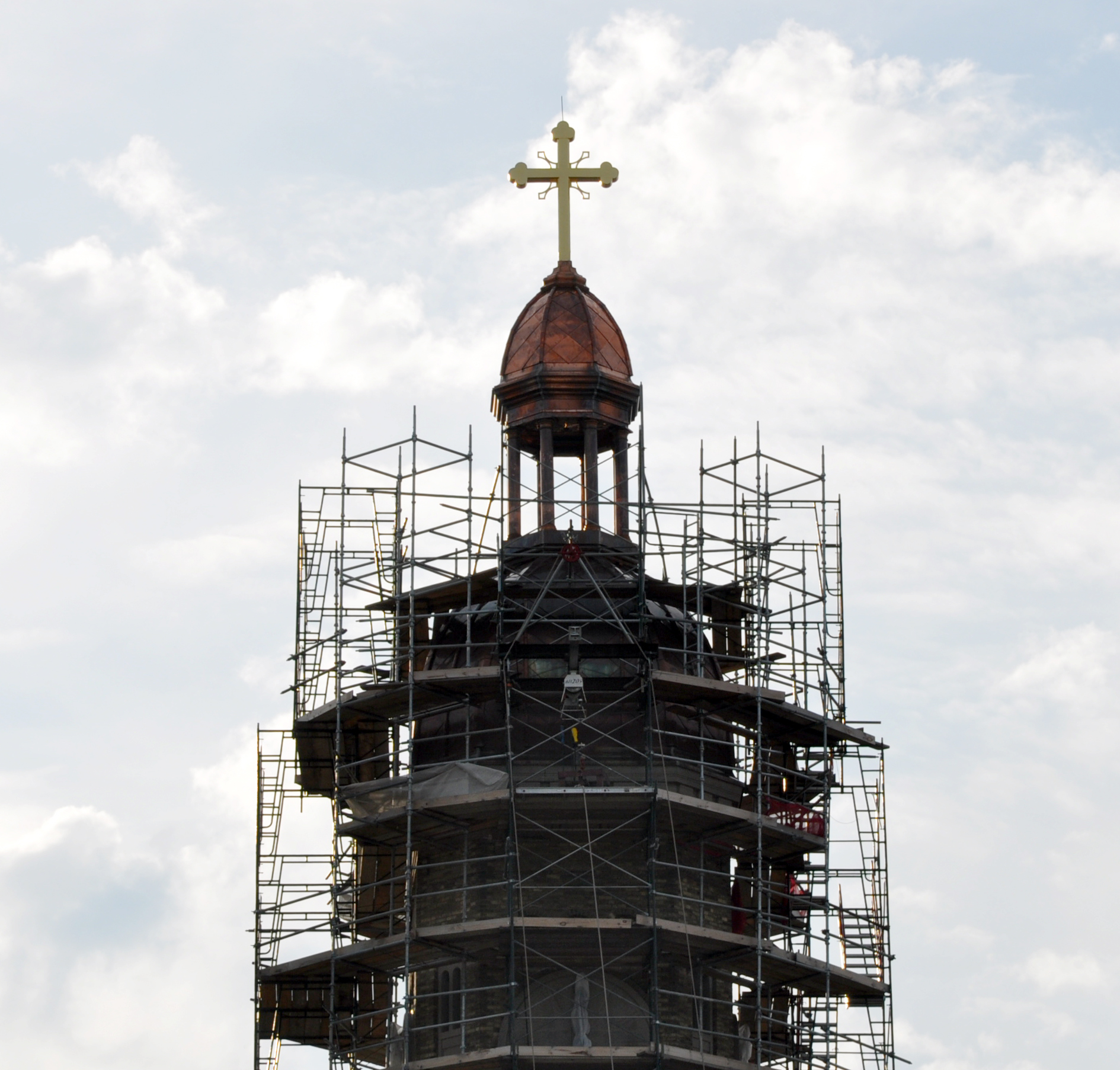 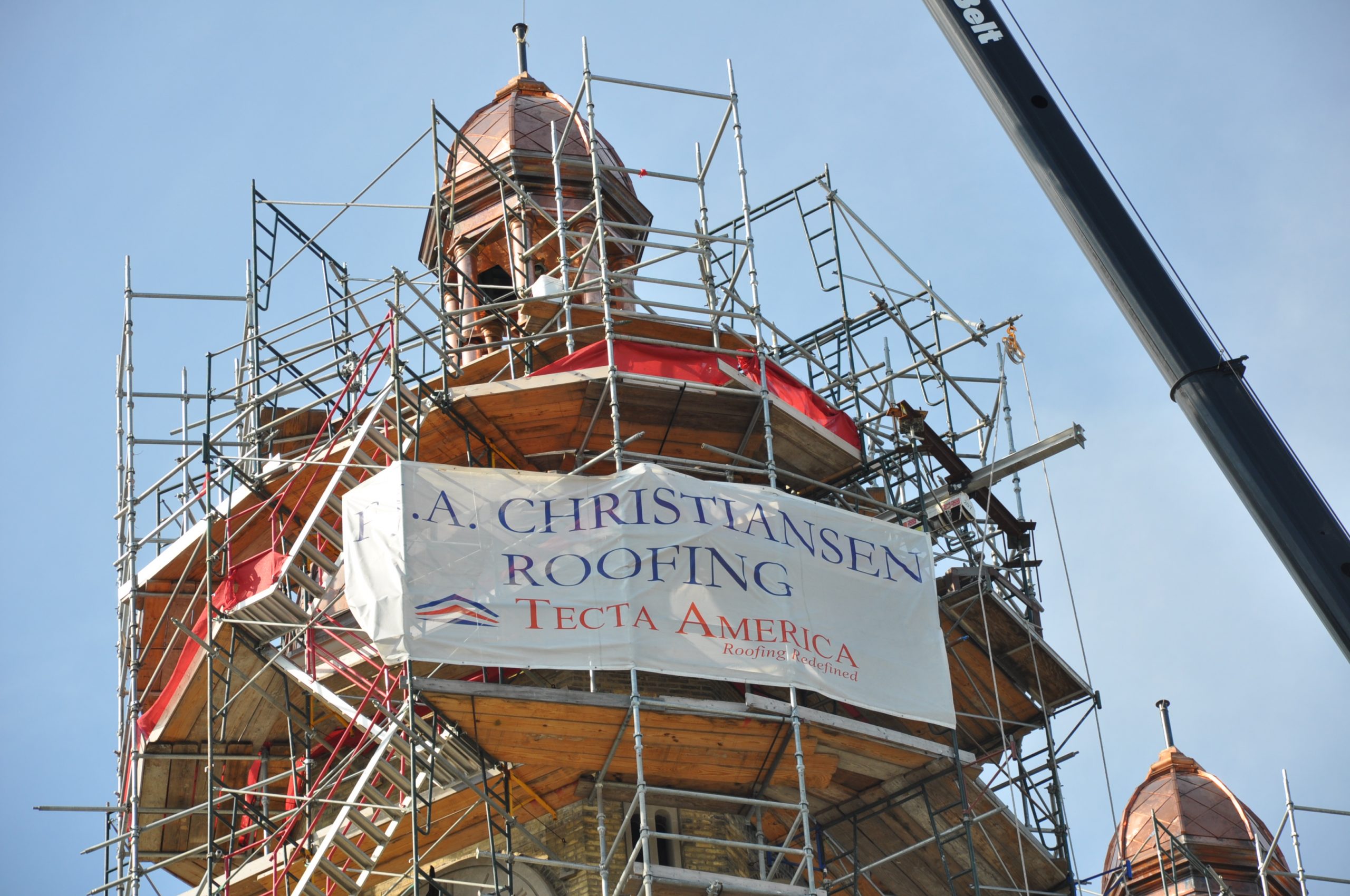 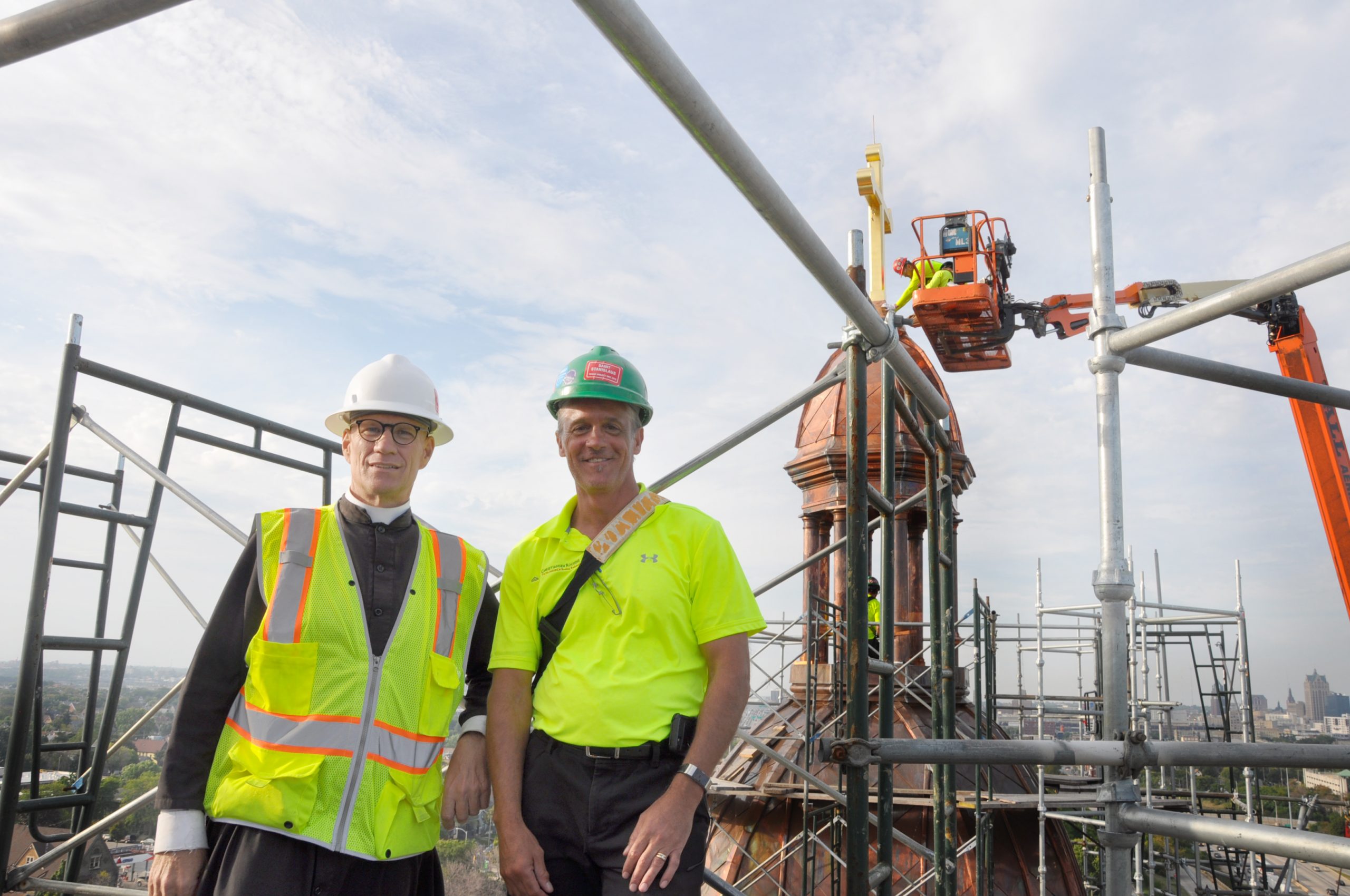 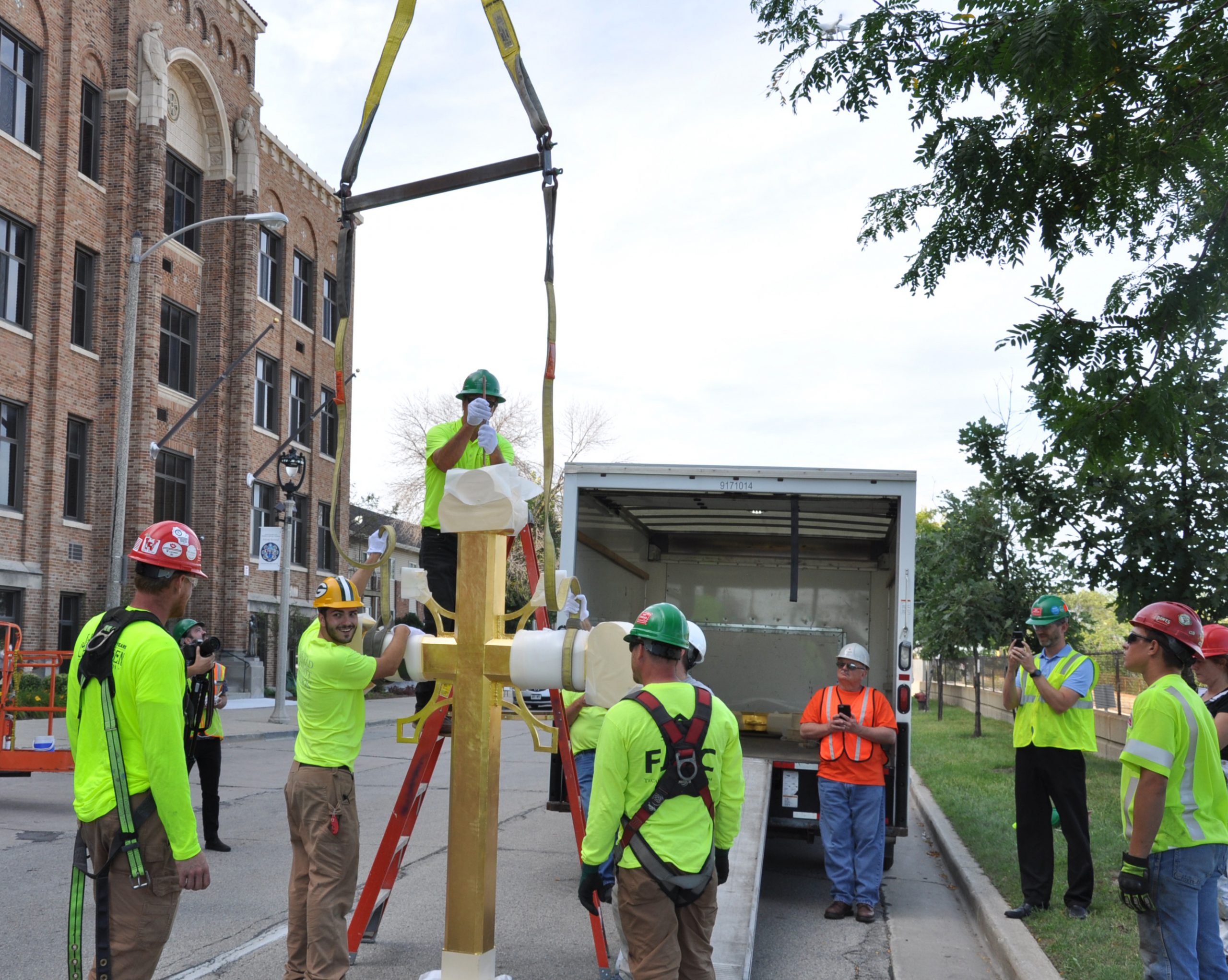 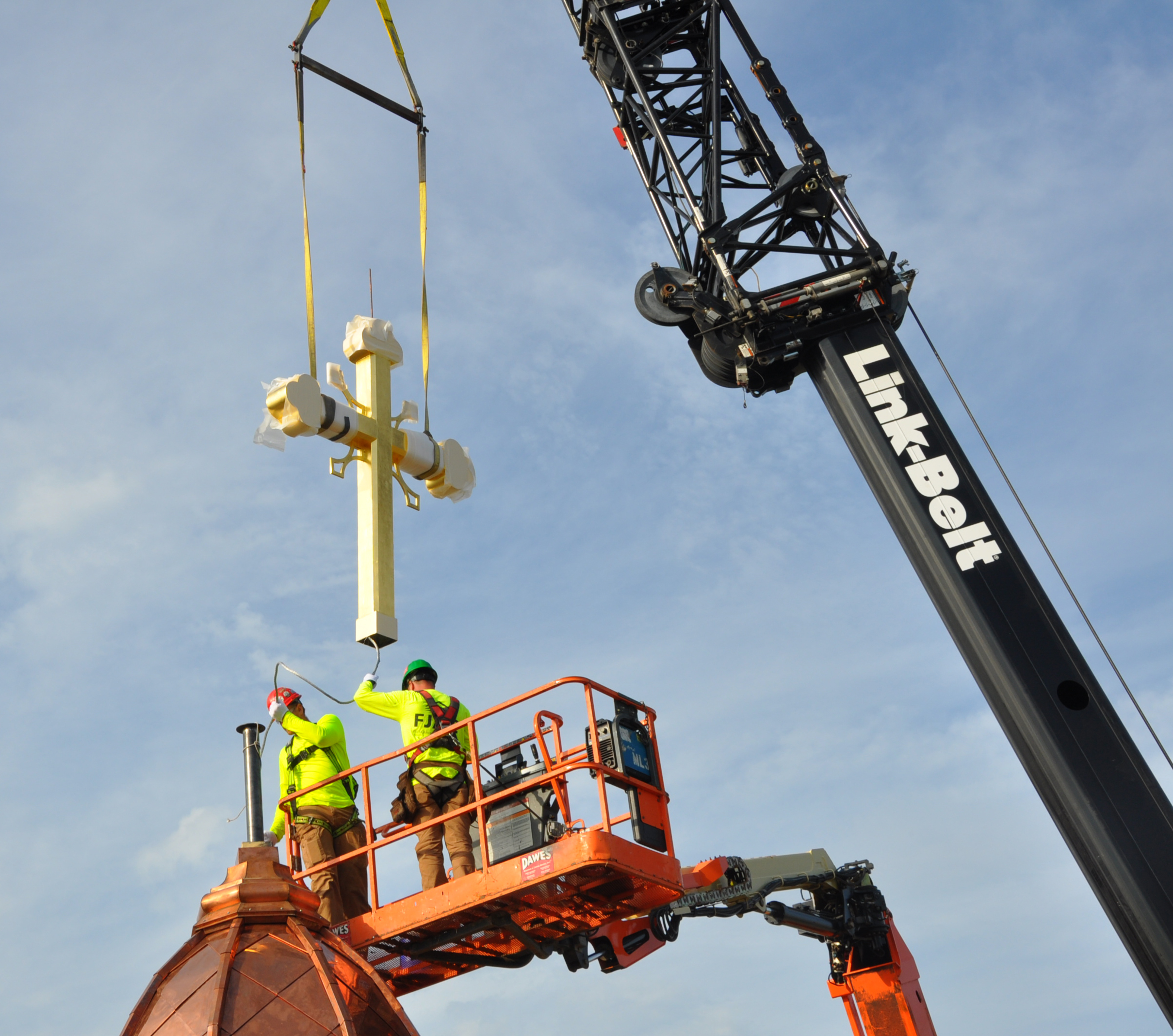 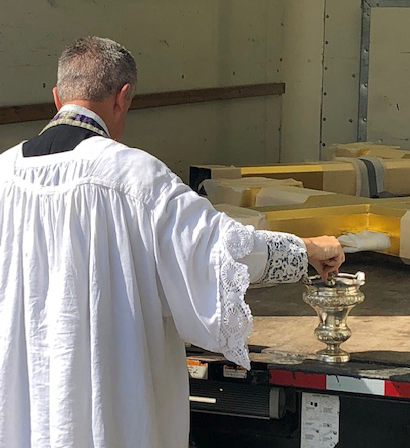 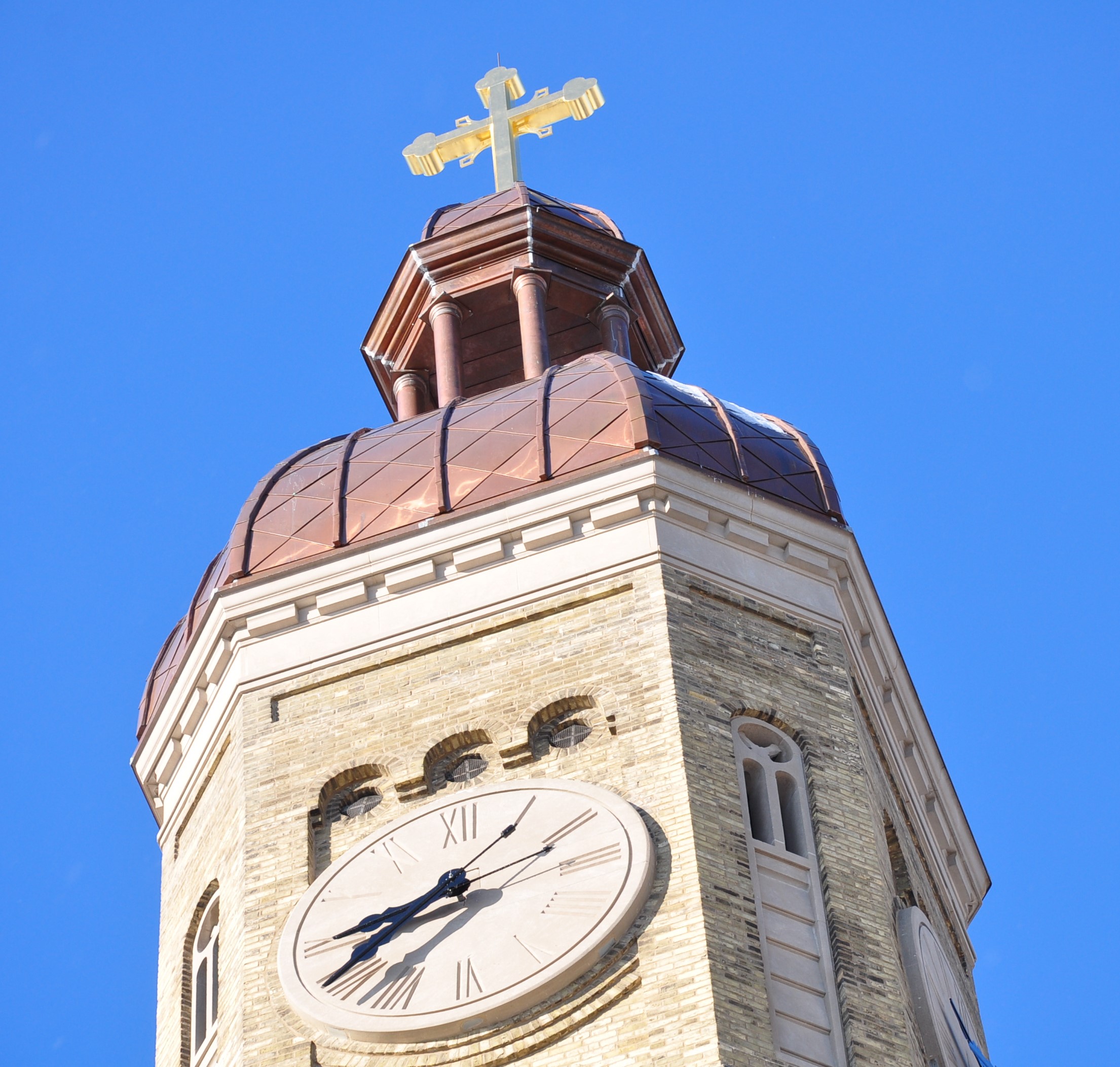 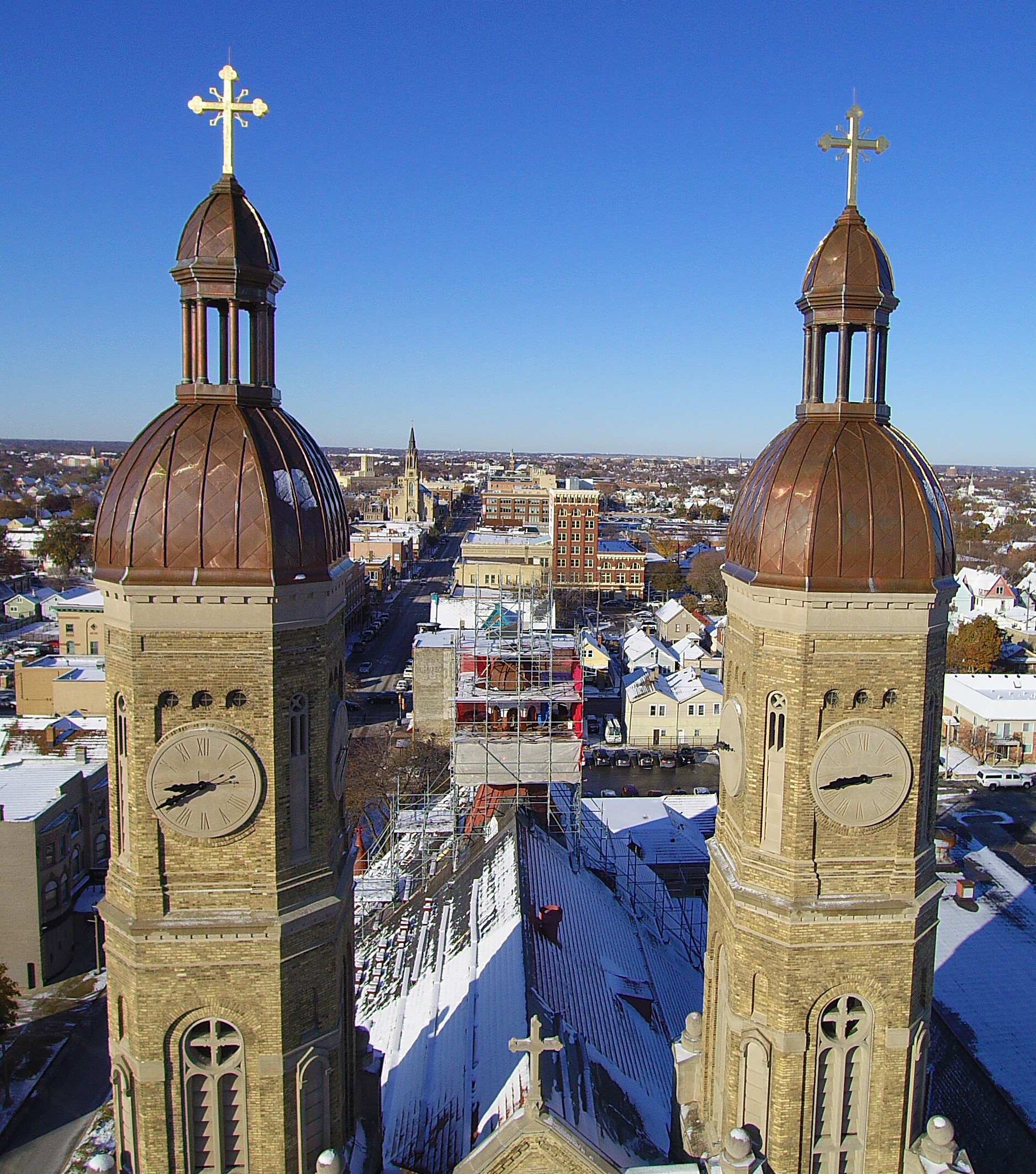 Copper-clad domes are back in place atop the two main bell towers of St. Stanislaus Catholic Church in Milwaukee, after being re-fabricated by F.J.A. Christiansen Roofing Co.
Thanks to good weather, meticulous planning and an ingenious transportation solution, both east domes were lifted into place on a single day, rather than the two-day work span originally envisioned. The work included installation of new crosses on each dome.
As noted in previous issues of our Roofer’s Report, FJAC crews removed the weather-worn, 19-foot-tall dome structures in December 2018. While FJAC crews performed on-site copper fabrication on the main lower dome areas surrounded by scaffolding, the top dome structures were taken to FJAC’s facility and restored by the Sheet Metal Department. That work included some repairs to the steel structures, new wood framing, and recladding in copper which the Sheet Metal Department fabricated.
The next challenge would be to get the dome structures back to the church in perfect condition – somewhat of a logistics issue due to the malleability of the copper, ensuring the dome legs remained in their exact position for reinstallation, and the height of the structures. The solution came from FJAC mechanic Joel Wesenberg, who built a structural steel cradle to securely hold the domes on a flatbed trailer. Wesenberg designed the cradle to prevent any shifting that could have caused the copper to be marred, and so the dome legs remained exactly in place to be repositioned on the towers. A solid, 3-inch steel pipe, mimicking a pipe that helps secure the domes to the towers, was thread through each dome, with the ends of those pipes resting on the cradle. The domes were each placed sideways on the cradle, with some areas welded to prevent any movement.
To ensure a safe ride to the jobsite, the trailer-hauling truck was buffered by an FJAC truck in the lead, one on the side, and another following.
Two cranes were ready on the street fronting the church, as well as a 180-foot man lift needed for the final touch – the regilded cross installations.
Prior to the lifts, the two cranes were orchestrated to raise the domes off the trailer and move them from their horizontal transit position to vertical. Constant communications between the crane operator and the crews atop the dome structures was critical to ensure a perfect line-up of the domes onto the tower supports.
Each lift took about an hour and a half – from the initial hoist to the point when they were anchored atop the towers.
While the first dome was being lifted into position, the flatbed trailer was taken back to FJAC to retrieve the second one, with the same protocol observed in securing the dome to the trailer and regarding the convoy to the church site.
Once the domes were secured, newly fabricated crosses were lifted to the top of each dome. The copper crosses were fabricated by Heather & Little in Canada and gold-leafed by Conrad Schmitt Studios of New Berlin. After being blessed by the Rev. Canon Benoît Jayr, each 10-foot-tall cross was readied for the lift, with crews wearing white cotton gloves to prevent any skin oils from affecting the surface.
Finally, a time capsule was placed in one of the east domes, with items from the church and from FJAC. All the work was done by 7 p.m., just as dusk was approaching.
The scaffolding around the two main towers has been removed, and all work on the church restoration is expected to be done by December, including work on a smaller, west tower dome which is also being reclad in copper and will be topped with a gold-leafed, copper cross.
The copper on the new east tower domes is already going through its natural color change, from the copper color to a darker hue that will be followed by a shade of blue and then the familiar green patina.
“We wanted to restore the church to how it was built,” said Abbé George Baird of St. Stanislaus, noting the church is 150 years old. He called the restoration work “truly providential.” The lift attracted numerous onlookers and people driving by on the adjacent, busy Interstate 43 also were treated to views of the occasion, with occasional honks of the horn and waves offered in salute.
Milwaukee’s Fox 6 TV news reported on the day’s work in a news segment that can be watched at: https://bit.ly/2WLkH5L
Noted FJAC President, Rob McNamara, “It’s an honor for our company and a once-in-a-lifetime opportunity for all of our professionals who did such incredible work to help restore another Milwaukee icon. It’s a real tribute to the abilities of our entire team involved, particularly in our Sheet Metal Department led by Superintendent Jeff Keller and our Foremen Paul Keller and Jason Thelen and Sheet Metal Shop Foreman Brad Skrzypchak along with shop mechanic Joel Wesenberg.” Prior notable historic rooftop restorations have included such iconic structures as Milwaukee City Hall, Basilica and National Shrine of Mary Help of Christians at Holy Hill, Basilica of St. Josaphat, the Milwaukee Federal Courthouse, and numerous others.
“This was an incredible project that required many different talents and a lot of expertise, from those planning the work before we even lifted off the old domes,” said Don Walter, FJAC Vice President. “That includes all those fabricating the new carpentry enhancements and copper panels, both on site and in our shop, to Heather & Little and their custom ornate copper productions, to the gold leafing by Conrad Schmitt Studios, to the logistics of moving and lifting the 4,000-pound units, added lead FJAC Project Manager Todd Samuel.”